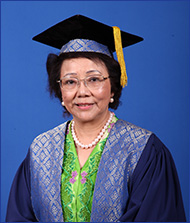 Toh Puan Dato’ Seri Hajjah Dr. Aishah Ong was born on January 27, 1945 in Kuala Lumpur, and is the fourth generation descendant of a tin-mining family. She was the second child of four siblings. She married Tun Dato’ Seri Haji Omar Ong Yoke Lin, former Cabinet Minister and former Senate President, in 1974 and they are blessed with three children.

She received her education at St. Mary’s Girls School, Kuala Lumpur, and St. Francis Girls College, England. Henceforth, she pursued her studies in medicine at Royal Free Hospital, University of London, between 1964 and 1969. After being registered with General Medical Council, she continued her training in the field of Primary Care in London, and in 1971, received her Diploma in Obstetrics in London.

Toh Puan Dato’ Seri Hajjah Dr. Aishah Ong served at the Health Ministry from 1973 until 1975, initially at the Kuala Lumpur General Hospital, then at the Government Clinic in Tanglin Hospital, followed by a stint at a private clinic, Young & Newton from 1975-1977. In 1977, she was invited by Tunku Abdul Rahman Putra Al-Haj to join a pro bono clinic organised by PERKIM in Kuala Lumpur, where she became a volunteer doctor, and worked one evening a week, from 1978 to 1985.

Toh Puan Dato’ Seri Hajjah Dr. Aishah Ong was among the members of the Founding Committee of Badan Amal & Kebajikan Tenaga Isteri-Isteri (BAKTI) from 1977 until 1981. From 1980 to 1981, she was the Honorary Secretary of BAKTI and since 1984. Until today she became the Chairperson of BAKTI Welfare Committee and as Executive Committee Member. She is also a member of the Board of Directors of Administration BAKTI Siti Hasmah Building (BBSH) as well as chairing the M.I.N.D. (Malaysian Information Network on Disabilities) project under the supervision of BAKTI.

She is also the Founder and Director of the Institut Kemajuan Wanita Malaysia (IKWAM) since 1987, Member of the Board of Trustees WAO since 1984, member of the Board of Trustees of Maybank Group Welfare Fund since 1990, Patron of Cancerlink since 1990, Chairperson of The Malay Mail Welfare Fund since 1991 and a Member of the Rhodes Scholarship Selection Committee for Malaysia at British Council since 1993. She was a Board Member of Tun Hussein Onn Eye Hospital from 1987 until 1994. She served as a Council Member of Association of the Blind Malaysia from 1979 until 1994 and a Committee Member of the Muslim Welfare Organization Malaysia (PERKIM) Women from 1977 until 1988.

Toh Puan Dato’ Seri Hajjah Dr. Aishah Ong was a council member of the Badminton Association of  Malaysia since 1994 and an Executive Committee Member from 1994 until 2001, a Trustee of the National Cancer Council (MAKNA) from 1994 until 2003, a Member of the Board of Trustees of National Heart Institute Foundation since 1996, Deputy President of the Badminton Association Kuala Lumpur since 1999, Patron of the Arthritis Foundation Malaysia since 1999, Founder and Trustee of the Cancer Research Initiative Foundation (CARIF) since 2000 and a Member of Board of Trustees of National Health Welfare Fund, Health Ministry, since October 2002. Currently, she is also the Independent Non-Executive Director for Nestle (Malaysia) Berhad, Director of the Board of the Malaysian Philharmonic Orchestra (MPO), Petronas and a Trustee of the Dewan Filharmonik Petronas.

Toh Puan Dato’ Seri Hajjah Dr. Aishah Ong was appointed the first Chairman of Healthcare Promotion Board Malaysia in 2007. She also chaired The New Straits Times Press Charity Fund and was entrusted as a Member of the Board of Trustees of the Maybank Group Welfare Fund since 1990 and joined the Board of Trustees of Tun Abdul Razak Foundation from January 1, 2007 until December 31, 2010.

In appreciation of her deeds and contributions, she was conferred Johan Mangku Negara (J.M.N.) in 1990, Tun Fatimah Gold Award in 1992 by NCWO and Distinguished Fellowship by IMU in August 1999. In 2003, she was awarded the Darjah Yang Mulia Pangkuan Negeri (D.M.P.N.) by the Penang Governor which carried the title Dato’. In 2005, she was conferred Darjah Dato’ Paduka Mahkota Selangor (D.P.M.S.) by the Selangor state government and in 2007, the Penang State Government awarded her with Darjah Gemilang Pangkuan Negeri (D.G.P.N.). She was also awarded with Anugerah Saudari Islam Cemerlang (2008) by the Department of Islamic Development Malaysia (JAKIM) and the Golden Heart Award (2008) by Bumiputra Designers’ Association and the Malay World Foundation.