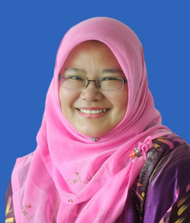 Professor Noorsaadah Abd. Rahman is the current Deputy Vice Chancellor (Research and Innovation) at the Universiti Malaya.  She is responsible for the development and strategic enhancement of the University's research and innovation profile of the university, aimed at enhancing research quality, capacity and capability across the University.  In addition, the DVC’s office is also responsible for building and managing relationships with internal and external research stakeholders, including the industries and the community.  Prior to the DVC’s position, Prof. Noorsaadah was the director of the Institute of Research Management and Monitoring that coordinates and manages the research activities in the university.

Professor Noorsaadah Abd. Rahman received her BA in Chemistry degree from California State University and her MSc from the University of California, Irvine in the United States of America.  She then moved to England and obtained her PhD from Cambridge University.   Upon her return to Malaysia in 1990, she was appointed as a lecturer in the University of Malaya. Among the accolades she has received include international awards such as the one awarded by the Japanese Society for Promotion of Science (1992) fellowship for her to spend research time in Kyoto University and the JWT Jones Travelling Fellowship, and the Royal Society of Chemistry (1995) award which enabled her to spend time on research  at the University of Lausanne, Switzerland.  She also received the Chevening Award (1996) and spent a year at Cambridge University and the Fulbright Scholar Award (2001) for 3 months attachment at Purdue University, West Lafayette, USA.  She has also received the CNRS Fellowship (2001/2002) for a 9 month attachment at the University of Bordeaux in France.  In 2014, Prof. Noorsaadah was appointed as a Fellow at the Academy Science of Malaysia and was also one of the recipients of  the the Top Malaysian Research Scientist (TRSM) Award.