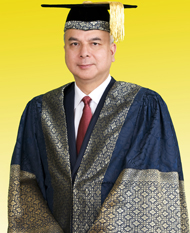 His Royal Highness Sultan Nazrin Shah, born on 27 November 1956 in Penang, is the Sultan of the state of Perak.

His Royal Highness holds a B.A. (Hons) degree in Philosophy, Politics and Economics from Oxford University; a Master in Public Administration from the Kennedy School of Government, Harvard University; and a Ph.D. in Political Economy and Government from Harvard University.  His research interests are in the areas of economic and political development in Southeast Asia, economic growth in developing countries and economic history.  He has written articles and spoken on a wide range of issues including constitutional monarchy, nation building, Islam, Islamic finance, ethno-religious relations, education and socio-economic development. His Royal Highness was conferred an honorary Master of Business Administration by the Cranfield Institute of Technology, United Kingdom in 1993, an honorary Doctor of Economics by Soka University, Japan in 1999 and an honorary membership of Magdalene College, University of Cambridge, United Kingdom in 2005.

The 426th Armed Forces Council, which convened on 1 April 2004, appointed His Royal Highness as an honorary officer of the Malaysian armed forces, with the rank of Brigadier General.

His Royal Highness is married to Tuanku Zara Salim. They have a son and a daughter.