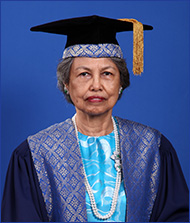 Tan Sri Dato’ Seri Siti Norma binti Yaakob was born on 6 July 1940 in Seremban, Negeri Sembilan. She received her early education at Rahang Malay School, Convent of the Holy Infant Jesus and King George V in Seremban. She later pursued law in London and obtained her Barrister-At-Law degree from the Honourable Society of Gray’s Inn, London in 1962. She also received a Certificate in Public International Law from the Council of Legal Education, London.

She has been honoured with Johan Setia Mahkota (J.S.M) in 1978 and Dato’ Setia Negeri Sembilan (D.S.N.S) on 19 July 1987. Tan Sri Dato’ Seri Siti Norma Yaakob was the first Malaysian woman to be appointed as the Chief Judge of Malaya in 2005.

She is married to Dato’ Seri Meor Ayob bin Mior Shaffie and blessed with three children and six grandchildren.

On 4 September 2007, Tan Sri Dato’ Seri Siti Norma was appointed the University of Malaya Pro-Chancellor. Currently, she sits on the boards of public companies that include KAF Investment Bank Berhad, RAM Holdings Berhad and RAM Rating Services Berhad. She is also Chairman of the Malaysian Competition Commission and a Director of RAM Rating (Lanka) Limited. She is the Chairman of the Board of Disciplinary Committee and member of the Board of Finance and Investment Committee and Board of Nomination and Remuneration Committee and Independent & Non Executive Director at Tenaga Nasional Berhad since September 2008.