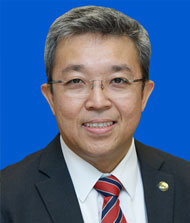 Professor Dato' Ir. Dr. Mohd. Hamdi Abd. Shukor was born in 1971 and raised in Muar, Johor. He holds a Bachelor of Engineering (Mechanical) degree from the Imperial College, London, England; a Master of Science degree in Advanced Manufacturing and Management Technology from the University of Manchester Institute of Science and Technology, United Kingdom; and a Doctor of Engineering degree from Kyoto University, Japan.

His academic career commenced in 1995 in Universiti Malaya (UM) as a tutor and he later became a lecturer in the Department of Engineering Design and Manufacture in 1997. He was then appointed as the Head, Department of Engineering Design and Manufacture (2003-2006). He was promoted to Associate Professor in 2006 and then served as a full Professor in 2010. He was also the former Dean, Faculty of Engineering, UM (2009-2011) and the former Deputy Vice-Chancellor (Academic and International), UM (2011-2014). On top of that, his service and expertise are also recognised internationally. He was a Visiting Professor at the University of California, Los Angeles (UCLA) in 2015-2016.

His astounding academic excellence as well as his remarkable leadership quality have made him a natural fit to helm Universiti Kebangsaan Malaysia as its Vice-Chancellor in 2019 and in November 2020, he assumes the role of leading Universiti Malaya as the 13th Vice-Chancellor.

In the aspect of research, Dato’ Mohd. Hamdi founded and has served as the Head of the Centre of Advanced Manufacturing and Material Processing (AMMP) and Centre for Research in Industry 4.0 (CRI4.0) in UM. In addition to producing more than 160 impactful publications in journals indexed by the Web of Science, he also has recorded a h-index of 33 with total citation of over 3850.

Throughout his career as an academician, he has mentored more than 150 postgraduate candidates particularly in the field of advanced manufacturing research and material processing. To date, he has supervised a total of 66 doctoral candidates.

Dato' Mohd. Hamdi's achievements, especially in the commercialisation of research activities, were truly proven when he was awarded the Universiti Malaya Excellence Award for two consecutive years i.e. on 2012 and 2013. In recognition of his outstanding service and contribution, Dato' Mohd. Hamdi was conferred the Darjah Johan Mangku Negara (J.M.N.) by KDYMM Seri Paduka Baginda Yang di-Pertuan Agong in 2019 and also Darjah Dato’ Paduka Negeri Sembilan (D.P.N.S.), which carries the title of Dato' by DYMM Yang di-Pertuan Besar Negeri Sembilan in 2020.